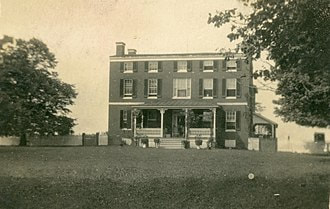 The history of the community begins with the land patent in November, 1656, of 150 acres to John Gibson and Henry Stoop. The tract was given the name Stoopley-Gibson. The original 150 acre tract was increased to 250 acres in 1657 with the purchase of neighboring property from John Winchester.

In December 1658, soon after the tract was surveyed, 125 acres were sold to Andrew Elinor, an early Kent Island resident who emigrated in 1644. After his death in 1660, the property was occupied by his widow Aneke, who remarried twice; to Macum Makennie, after whom Macum Creek is named, and John Dabb.

In 1673, probably following the death of Aneke, a case was brought before the colonial Chancery Court to determine whose claims to ownership of the property were genuine. In 1674, the court determined that William Joyner and Lawrence Arnold, husbands to Andrew Elinor’s daughters (Sarah and Ann), held joint claim to Stoopley-Gibson. At this time, the size of the property is described as 150 acres producing a yearly yield of 200 pounds of tobacco.

The chain of title is unclear between 1674 and 1730, when the property was resurveyed for Francis Bright, who purchased Stoopley-Gibson in 1732. The holdings must have increased during the period of 1674-1730 as Francis Bright’s deed includes 200 acres. Francis Bright’s household included a small number of servants as well as his immediate family – a wife and three children.

The 1798 tax assessment lists the property size as 176 acres, with a house valued at $600, a barn, and a corn house. The house is almost certainly the extant manor house structure, which was built during the Bright ownership of the property, probably between 1760 and 1780.
The Bright family maintained ownership of Stoopley-Gibson until the death of Franklin Bright in 1865. In 1868, Marmaduke White, a prominent landowner with $8,000 in real estate, purchased the property. In an 1880 Chancery Court case, the property was described as 162 acres containing a two-story brick house, a frame back building, and “all of the necessary outbuildings”.

Stoopley-Gibson remained in the White family until 1934, when it was sold to Gertrude McGuckin. During the McGuckin family’s ownership, the house was renovated, restored and added to. One of the parts added was a two-story screened porch.
In 1955 the property was sold again, to John Sause, who re-titled the property under the current name, White’s Heritage. The property was sold to Luther Gregory in 1971, who, in turn, sold it to the White’s Heritage Development Partnership, LLC in 2000.

For more information check out the Wikipedia article for the Stoopley Gibson Property.